What a question worth stopping to think about it! Let’s be honest, there are differences between a true pilgrim and a false pilgrim. So, in order for everyone to recognize them, here is a truthful portrait of the peregrinus veritabilis*,  whom deserve our endless reverence and respect!

A true pilgrim goes by foot 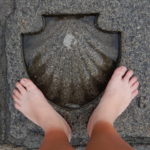 Yep, first of all, a true pilgrim walks. Because he is inspired by his ancestries from the Middle-Ages, he can’t decently go on a pilgrimage with some devilish motor-driven engine. He goes, of course, but always by foot. He can eventually drag a donkey or ride a horse, but it is quite as far as the bounds go.

A true pilgrim certainly isn’t a bike rider, whatever the pilgrim’s office says. To pay a visit to our dear lord James by bike… well, really? How amazing our saint friend has not turned over in his reliquary yet!

Even worse than these frauds (yes, my Lords and Ladies, it is possible!), are all of those who move around by scooter, car, bus, plane or space rocket. Of this heretic tabooed specie I will speak no more. Unless they steal a true pilgrim’s bed right under my nose, in which case I will sue and torment them with no pity.

A true pilgrim leaves from his home

His adventure starts when he gets out of his bed. A true pilgrim puts his first lunch in his bag in his kitchen; he slips into his coat and caplet and puts his round-shaped hat on in his entrance hall; he double-locks his front door and tosses the key out. An action he’ll soon regret when he’ll realize he forgot to take the scallop and the pilgrim’s passport he left on an obvious spot next to the trinket bowl. Only when he’ll break a pane of window, get his treasures, call a glazier and give the man 3/4 of his pilgrimage’s budget will he eventually leave to Santiago with a free and light heart.

The pilgrim who live in Padrón, Betanzos, Silleda, San Marcos and many other places although are embarrassing singularities to this feature. Shortly said, all the pilgrims living within 62 miles from Santiago, or in the North-West of Spain. They will not be able to become true pilgrims unless they get away from Santiago before they return to it because, as one knows…

A true pilgrim comes from afar

Let the callosities patiently grown by many miles under his feet be the proof of it! He whose pilgrimage starts at the end or he who doesn’t walk enough deserves neither the honors nor the respect of the pilgrim’s guild. The farthest the start is, the greatest the glory will be.

If pilgrims could come by foot from others galaxies, no doubts they would be revered by any true pilgrim.

A true pilgrim carries what he needs 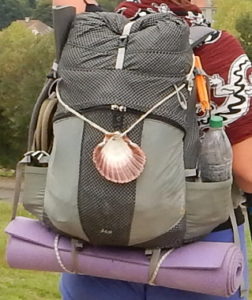 May any cheater having his backpack transported for him be reported! Anyone who uses the assistance of a luggage transporter or worse, who plans his trip with a sweeper-car must be a fraud.

Those having to part from their backpack because of a health issue that could eventually lead them to their death if they were to carry it themselves may be put up with (conditions apply to tolerance, granted after interviews and convincing proofs). Anyone else (including those who fail the exam) will be properly punished and have his title of genuine pilgrim removed from him.

Please note that the crushing weight of an overloaded backpack isn’t a acceptable argument, given that anyone should know…

A true pilgrim is frugal and has no wealth

As a result, he could very well do without a backpack, as his fortune comes down to what he wears on his back and a half toothbrush. (And this brings the topic of the backpack’s portability to a close, because nearly nothing in the bag = light bag = portable bag!)

So, a true pilgrim is poor, as clearly stated in the booklet given with the French Christian’s pilgrim’s passport:

The future [and needless to say, true] pilgrim about to leave family and possessions knows he will change his condition and join the impoverished. The ritual [of departure] depicts the gravity and radicalism of this transformation to the state of a pauper* and a peregrinus*: the dispossession of anything possible and the reliance on God.

Bag and staff are then the only attributes of the one who becomes a poor and a pilgrim and are given by the priest before benediction.

If even the Church says so…

On the practical side, a true pilgrim says “thanks, but no thanks” to comfortable hotels and private accommodations. He prefers public or parish accommodations where the fun is all about boxing in as many bunk beds as possible in one room. Better, accommodations with donativo* that allow him to sleep on a cozy mattress (and to be spoiled) without paying a single coin. Better (again!) a bit of flat and sheltered grass that allows him sleep outside without breaking his back or being soaked. As for eating, vade retro* feasts, gourmet menus and others fine food. There’s nothing like the famous €10 (sometimes €12 already!) menu del peregrino*! Apart maybe from a slightly dry bocadillo* or some fruits and nuts hand-picked in a orchard on the way.

Tops of a true pilgrim’s pilgrimage are, let’s sum it up, no bag, sleeping out in the open, eating out of nature. There really is nothing like it, although to be honest, this rare subspecies of peregrinus veritabilis* is quite endangered… 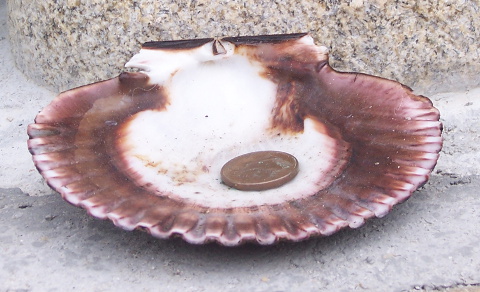 A true pilgrim is pious

Why would he be doing a pilgrimage otherwise? Whether he is devoted to the Saint James Cult or is a repentant, or a Catholic, or a regular Christian, or a fundamentalist, or an ecstatic mystic, or a feet fetishist or a worshiper of the god Blisteria*, a true pilgrim goes to Santiago because he is carried by a boundless faith. He believes in a spiritual reality and ended up walking on a dusty path after he heard a mysterious call.

A true pilgrim visits every church on the way and breaks into the ones that are locked; sacrifices his feet on the altar of the scallop; sleeps only in holly-like accommodations. He can be recognized by the stars in his eyes, the heavy cross on his back and the absence of shoes on his feet. Also by his endless dedication to convert the false pilgrims on the Way to his believes. A true pilgrim stands to his faith and isn’t afraid to share it.

The root of this pilgrim tradition is uncertain, maybe inherited of the repentants I just mentioned… Whatsoever, a true pilgrim suffered, is suffering or will suffer. 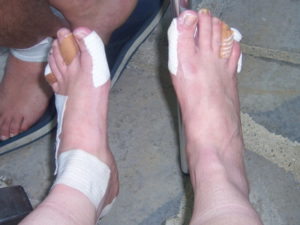 A true pilgrim can be recognized by his decrepit-like walk, by his bandaged feet and his prostrate look at the stage. A true pilgrim earns his stripes by the number of blisters he got (bleeding ones score double). The worthiest and most devoted ones win a consolation T-shirt when they arrive in Santiago, one that states the very truthful and famous “No pain no glory“.

A true pilgrim has a wide assortment of torments to chose from and to spice things up. Tendinitis, blisters, sprains, fractures but also bed-bug bites, dog bites, tics raids or even stirred up emotions, blues, self-devaluation… The list is long and non-exhaustive!

Let’s face it, a true pilgrim is a bit masochistic. Why else would he give away his time off to trudge through dust under any weather instead of hopping on a plane to take it easy and relax on the beach?

A true pilgrim is respectful

He’s the champion of diversity. Men, women or children; any color on the rainbow, spiritual belief or cultural habit, He likes anyone and shows it. He’s full of attention for everyone, as he always has a kind word for humans and carrots in his bag for donkeys. He despises the ones who fiddle around with plastic bags at 4 a.m. in a crowded dorm, as much as their friends who use trumpets as an alarm just a 1/2 hour later.

Even if he feels just like it, a true pilgrim hold his fanciest insults back when bikers, heretics, cheaters, no-bagger, tourists, epicureans, rich people, pagans and insolent people who go without pain all pass him once and again.

A true pilgrim also pays attention to his environment. No paper, tissue, plastic, dropping or toilet paper is left by the side of the way. A true pilgrim leaves them a little further or buries them, while the most fundamentalists carry their trash around or hold it back until the next stage.

Finally, a true pilgrim is a master of tolerance

How else could he put up with all the false pilgrims who wander around the Way with total impunity?

Note to the true pilgrims who recognized themselves and may hold a grudge as well as to others who are disappointed not to fit with the description of the peregrinus veritabilis: there is obviously no smoke without fire, but this is clearly a caricatural and humorous portrait. Please consider it as such! 😉