Ultreia! Here is a little word from Santiago’s vocabulary, just as strange as it is famous. Exchanged between pilgrims, printed on papers, carved into wood or rocks, you can see/hear it pretty much everywhere along the Ways.

Let’s discover a medieval saying that managed to stay young! 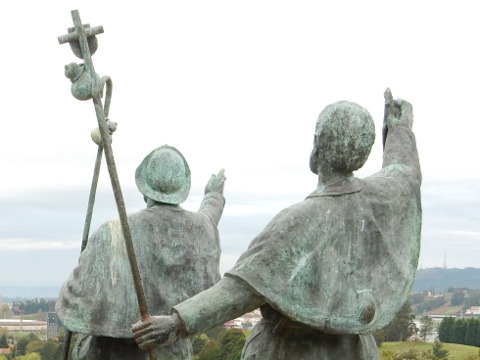 Some say that “Ultreia” came up in Spain , Galicia or France. That the word comes from archaic Spanish or old French. That it appeared thanks to pilgrims and on the Camino de Santiago. These affirmations are mostly guesses (or even inventions), because a word’s origin is always difficult to understand… What is certain is, it’s completely useless to look it up in a French or Spanish dictionary: Ultreia is an expression in Latin! And it’s actually a 2-parts word, split between “ultr” and “eia”. 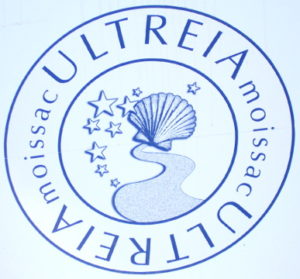 So, recap! ultr +eia = “further, beyond” + “Let’s go!”. Ultreia just tells the energetic intention to go with courage toward some “beyond”, to exceed something. By crying “Ultreia!”, pilgrim actually say “Let’s keep going! Let’s go some more, let’s go beyond!”. Today, several ways to write it exist: ultreïa, ultreia, ultreya…

So much for such a little word… And still, actually, “Ultreia!” is not exactly supposed to be alone. Traditionally, the complete saying is “E ultreia e suseia, Deus adjuva nos”.

Suseia is similar to ultreia: both are built in the same fashion, they suggest a movement and support. Suseia has a different root, “sus”. This time, it conveys an idea of going up: sus comes from susum, which means “from below to top”. In a more simple way, it translates as “higher”. Then, Deus adjuva nos is simply translated as “God help us” or “with God’s help”.

“Ultreïa e suseia, Deus adjuva nos!” is then a cry that incites to motion and to the exploration of what is beyond ourselves, with “God”‘s help. Simply translated, it means “Let’s keep going further; let’s keep going higher… God helps”.

“God”‘s note: As a reminder, the Way was originally a catholic pilgrimage… Everyone will use the word as s-he pleases, as the meaning of “God” is a whole topic in itself! 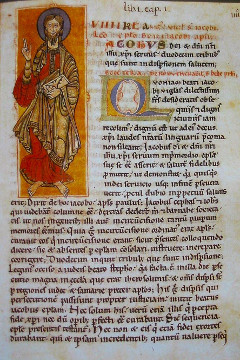 Once again, to date precisely when, where and why a word came up is difficult, or just impossible. That said, a first known use of “Ultreia” in relation with Santiago is quite pointed out. Do you know the Codex Calixtinus, also called Liber Sancti Jacobi or the Book of Saint James? This anonymous document was written in the Middle-Ages and its parts were put together along the 11-12th centuries. Dedicated to the glory of Saint James, it’s one of the essential manuscript of the pilgrimage’s History. It holds a song in which there is the whole saying E ultreïa e suseia, Deus adjuva nos:

There are also 2 others uses of the saying, but partial: E ultreia e suseia. In chapter XXVI of Book I that is dedicated to liturgy and in the song Ad Honorem Regis Summi (“In Honor of the Supreme King”) of Appendix I. 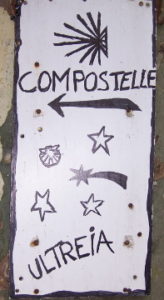 Today, ultreia is a saying that is directly associated to the Camino de Santiago. It conveys an idea of surpassing oneself that appeals to pilgrims. On the Way, they have to “go further” physically and spiritually. Many also greet fellow pilgrims using it.

Ultreia is relatively not common in Spain, but still used. “Buen Camino” remains the main greeting on the Way. In France however, the Chant des pèlerins de Compostelle by Jean-Claude Benazet (Song of the Pilgrims of Santiago) made of ultreia a particularly popular rallying cry. The chorus is a full cover of the medieval saying:

This song has become a reference for French pilgrim. It very often heard along the way, taught in accommodations and sung while walking. Some even made it a daily ritual. Ultreia replaces “buen Camino” more easily in pilgrim’s greetings. Often recall by the French, ultreïa and the Chant des pèlerins can be heard here and there.

Ultreia also exists away from the dust of the Camino. It has be chosen by a Spanish music band (Ultreia) or by catholic movement for some of its meetings (Ultreya). The word is still wildly associated to Santiago: many arts stage the saying and remind its medieval meaning. Movies, books, show and artists use it to give life to their work and to the Way.

What about you? Have you already heard Ultreia somewhere? Do you use it? Did you know its meaning? 😉

I decided to add this section after JNoble’s comment and his-her (?) questions about diereses and language variation. It was quite a tough one to me, but it led to very interesting information and details about the various “Ultreia” spellings. I also think appropriate to say such specialized language history and in-depth phonetics are not my domain. Still, I’ve done some research and here are the results: I’ve tried to make is short and clear. (Yet feel free to dig further to grasp the linguistic and historical mess diereses and its derivatives are 😉 ) In any case, thank you JNoble to have brought more knowledge upon us!

As “Ultreïa” comes from Latin, I focused on Latin only. It was widely used even in areas using other languages. Consequently, even if Germanic languages (from which English derives as well) reused it, variations of the word occurred as derivations specific to the Latin language.

So, to start with, let’s note that early forms of Latin alphabet only had 20 letters. “i” was both a vowel and a consonant, which was pretty confusing and hard to read. It also didn’t reflect the consonant’s phonetic quality. It was pronounced /j/ (always like in “yes”) and not /i/ or /i:/ like the vowel (like in “sit” or “machine”). In the Middle Ages, all of this led to the introduction of the diereses and of the letter “j” as clearer equivalents to write the consonant “i”. The exact time those new signs were introduced for this purpose is very difficult to determine and eventually controversial. Especially considering that all 3 ways of spelling coexisted for quite a while, with no rule or logic regarding when preferring one to the others! Copyists and printers usually went for whichever one they were used to use.

So, to sum it up, “ultreia”, “ultreïa” and “ultreja” are all correct spellings since the Middle Ages and on. The Codex Calixtinus uses the third option in the song “Dum pater familias” of the Appendix II. I couldn’t find the right pictures from the original book, but as it was written by different people, the other “ultreia” spellings could be different… I’d be very interested if anyone could find it!

Nowadays, the letter “j” got a life of its own and became a full consonant. “Ultreja” is rare in countries with Latin languages, maybe because the sound of “j” changed a lot there. However, it’s more easily used in countries with Germanic languages like Germany, where “j” is still pronounced /j/.

The dieresis inherited its current role to signal a phonetic change in many languages. “Ultreïa” is very common in France and could possibly be in Spain too, if the word was more widely used there.

I would guess the “Ultreya” spelling occurred a lot later in time, influenced maybe by phonetics or more modern languages like English. I didn’t find any historical or linguistic fact to support that theory, but it seems unlikely to be a Latin variation. In Classical Latin, “y” was indeed only used with Greek loanwords, not with regular Latin words…

9 thoughts on “Ultreia : meaning of a pilgrim’s cry”