Why cut in half the stage from Saint Jean Pied de Port to Roncesvalles? Ascent of the Pyrenees, splendid views upon the surrounding Basque Country, herds of stock let loose, ethereal sensations, excitement to cross over Spain… This stretch wins unanimous agreement: it’s one of the most beautiful stage of the Ways to Santiago! Yet, if it’s totally doable, it’s also one of the toughest. Its length, its important incline, the stain it requires; not even mentioning the stress induced by the idea of walking over a mountain, of a first day on the Camino, of the bed race or of the fear to arrive too late… There’s not exactly enough time to wander around and it cuts the pleasure to walk the stage!

And yet, there are not one but several easy ways to cut in half this mythical stage and fully enjoy it… Here is now a review of your options!

Note: despite all the efforts put into keeping the blog updated, the Camino changes all the time… You’ll always get the most up-to-date information from the people who run the accommodations and services I’ll talk about here! (Last update: June 2018) 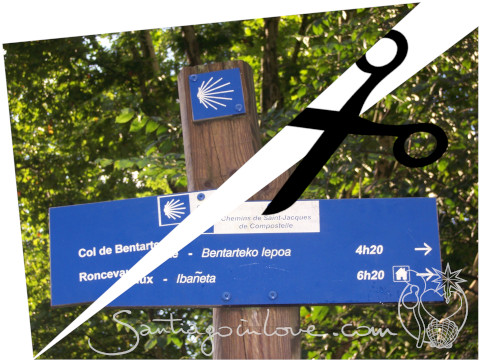 Of course, accommodations on the Way

This option is already well known. The idea is to stop at one of the existing accommodation between Saint Jean Pied de Port et Roncesvalles. More and more pilgrims decide to chose to do it! This option is possible on the high route through the mountain (route Napoleon) and on the the low route through Arnéguy-Valcarlos (valley route).

!!! Warning !!! If you chose this option to cut in half your stage, make sure these places are open at the time you’ll be walking! Also, check the following information with your hosts. Finally, these stops are more and more popular. Think of booking your bed ahead, especially during the pilgrim high season (May and September).

On the Napoleon route, through the mountain 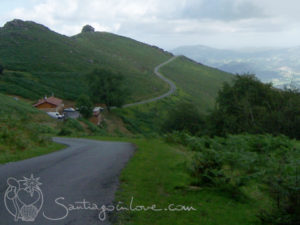 Orisson, the most famous stop between Saint Jean Pied de Port and Roncesvalles

The ferme Ithurburia in Honto is the first option after Saint Jean Pied de Port that allows a stop for a night. It’s open from March to October and is at about 5.5km (~1h30 walking) from the village. It offers accommodation and food as well as some other services. Contact and reservations: Jeanne Ourtiague, jeanne.ourtiague@orange.fr or 0033 559 37 11 17 or 0033 680 53 00 46.

The Kayola gîte is a bit further on the Way. It’s open from April to October and is at about 7km (~1h45 walking) from Saint Jean Pied de Port. Managed by the refuge of Orisson, you’ll find only accommodation there. It is however possible to book a meal at Orisson and get there by your own means. Contact et reservations: refuge of Orisson.

The refuge of Orisson is the last possible accommodation on the Napoleon route. It’s open from April to October and is at about 8km (~2h walking) from Saint Jean Pied de Port and about 1km after the Kayola gîte. You’ll find accommodation, food and some other services. Contact et reservations: refuge of Orisson.

On the low route, through the valley

Prefer this itinerary from November to March when the Napoleon route is closed or from April to October if the weather is too bad. Arnéguy is the first stop on this alternative. There are no facilities dedicated to pilgrims in this village that is at about 8km (2h walking) from Saint Jean Pied de Port. However, you’ll find several accommodation and restaurant options. In the center, the Clementenia hotel (open all year long, contact: ehotelleclementenia@sfr.fr or 0033 524 34 10 06) and the Maison Hargina (contact: 0034 948 79 02 00) are the most practical options that are on the Way.

Valcarlos is the second possibility for a stop on the low route. It’s at about 11.5km (~2h45 walking) from Saint Jean Pied de Port. The village offers various options regarding accommodation, restaurants and services. The only place dedicated to pilgrims is the Albergue Municipal Turístico, open all year long (contact: luzaide-valcarlos@wanadoo.es or 0034 948 79 01 17). Other accommodations also host pilgrims: the Casa Rural Etxezuria, Erlanio, the Mendiola apparments and the last option before Roncesvalles, the Casa Rural Navarlaz-Toki Ona (1km after leaving the village, 300m out of the Camino).

Not so familiar, shuttle services

Here is an option pilgrims don’t really know about. That’s too bad, because it really is a handy way to cut in half that stage! This service is mostly available during the season on the Napoleon route itinerary… How does it work? 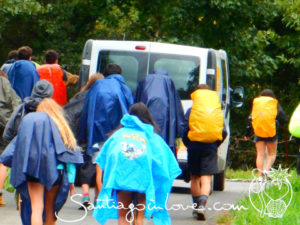 The shuttle services, an easy way to cut in half your stage

On the first day, you walk from Saint Jean Pied de Port until a meeting point you and the driver have agreed upon. A shuttle recovers you there and drives you back to the village, where you spend a second night. On the second day, you take the shuttle again at the village, which drives you back where it retrieved you the day before. You’ll then finish your stage until you reach Roncesvalles.

Different transports services offer to put such trips together. Some are companies that specialize in pilgrim transportation, like Napoléon Compostelle or Express Bourricot. Others are taxis that also offer their services along the Way, like the Taxi de l’Ostibarret, the Transports Nafarroa (contact: giteguill.lopepe@gamil.com or 0033 675 78 36 23) or the Taxi Maïtia (contact: maitiajeanbaptiste@gmail.com or 0033 683 94 69 32).

Be careful when you book your shuttle, these companies and taxis don’t offer the same services! Conditions, meeting points and prices change from one to the other. Check with them to know the details of their services to confirm a shuttle that meets your needs!

For seasoned hikers only, bivouacking outside

Last alternative, the most challenging (some would say extreme) to cut in half your stage: sleep outside! Of course, this option is not for everyone. And this deserves a proper warning!

Bivouacking on a whim is bad idea if you are unprepared, inexperienced and without appropriate gears. It could leave bad memories at best or end badly at worst. Sleeping outside when the weather is bad, without water or without anything to stay warm (just some examples) can quickly become unpleasant and even dangerous! It doesn’t take much to go from a nice experience to survival circumstances, which is NEITHER to seek OR a positive thing. The Camino should remain enjoyable and nothing is worth risking your health or life to do it. Always prefer another option, unless you (really!) know what you’re doing and what you undertake by sleeping outside in the mountain. 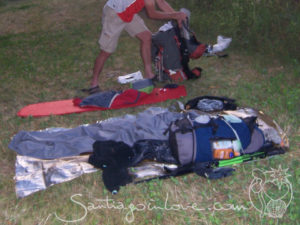 Sleeping outside, an nice experience… to save for bivouac veterans!

Now that everyone is comfortable with the idea of sleeping outside, let’s see how to do it!  Before anything else, be sure you’re well and properly geared up. I won’t elaborate the matter, but if you don’t see exactly what I mean by “well and properly geared up”… it would probably be better for you to pick another option to cut in half your stage!

You can stop wherever you want as long as you respect regulations about bivouacking. If you prefer more “civilized” spots, the shelters in between the Croix Thibault and Roncesvalles are good options to set camp. The first one is a simple mountain hut and is less than 1km after the Croix Thibault (meaning ~15km after Saint Jean Pied de Port). The second one is the Izandorre refuge, just as simple but equipped with a SOS relay. It’s at ~19km from Saint Jean Pied de Port. A little reminder here to finish, it’s forbidden to camp within a 200m radius from a drinkable water source! Even if it seems quite handy from a water management perspective, forget about camping at Roland’s fountain.

And again, prefer another option unless you’re already a seasoned camper!

Recap of your options to cut in half your stage

For a stage estimated at ~27km; walking time on an indicative basis and rounded up

From Saint Jean Pied de Port, going to —–> Stopover spot —–> still to do until Roncesvalles

On the Napoleon route

On the low route through the valley