Fall is settling in, winter slowly comes into view. Walking off season is a beautiful experience, that still required some caution… especially when in the mountains. Getting lost and/or have a serious accident comes way faster when there is fog or snow! To limit damages, the Spanish stretch of the Saint-Jean-Pied-de-Port/Roncesvalles stage knows a winter closure from November 1st to March 31st.

Concerned stretch   ~    A government ordinance   ~   Overstepping the winter closure, options and consequences   ~   Starting from Saint-Jean-Pied-de-Port in this period “how-to”   ~   The essential within 3 lines +1 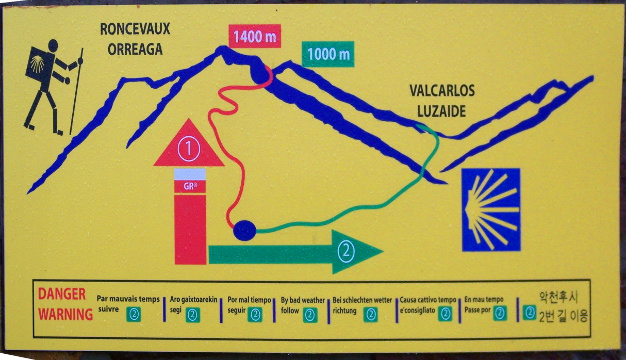 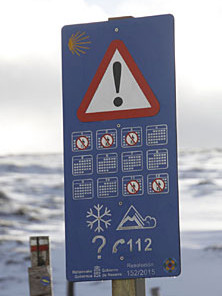 A little reminder! There are 2 itineraries between Saint-Jean-Pied-de-Port and Roncesvalles: the crest route and the one by Valcarlos. The first path is the “classical” way taken by pilgrims: it follows the GR65 and GR12. The second path is the secondary itinerary, advised when bad weather s expected. The winter closure applies to the crest route, on its Spanish stretch.

The restriction indeed starts at the border, whitch is  at the pass and fountain of Bentarte (also calles “of Roland”). The Camino continues to Lepoeder pass, where pilgrims can chose to either keep going on the GR64 or switch to the GR12. The winter closure applies both to the GR65 to Roncesvalles and to the GR12 going through Ibañeta pass. Note that the stretch from Ibañeta to Roncesvalles is not concerned by the restriction.

The winter closure of the crest route is not an option to the pilgrim’s choice. It’s a legal ordinance voted by the Chartered Community of Navarre. The recent press (around

November 1st, 2016) quotes the 487/2016 resolution of October 21st. I found no trace of it in the official journal of Navarre, nor did I on the Internet. Maybe this text isn’t published yet, but if you find it, let me know!

However, all articles clearly refer to the 152/2015 resolution of July 1st that has been published! (read it here, in Spanish) As any law, nothing enjoyable to read… Here are the important thing to remember of it:

France has not issued a winter closure of the GR65 from Saint-Jean-Pied-de-Port. Theoretically, this path can be taken until the border. However, 1) the difficulty of this stretch in winter is equal  on the French side of the mountain and 2) once at the border, the only possible path is the one that is closed by Navarre! The pilgrim’s office and the police of Saint-Jean-Pied-de-Port cooperate with Navarre and reroute pilgrims on Valcarlos itinerary.

At the time of the 152/2015 resolution, there was only one way to legally go on the crest trail. One had to get an authorization to the Agencia Navarra de Emergencias. The authority of this institution has since been transferred to the Dirección General de Intérior. I have no idea whether getting such authorization is still possible, or if this new organization can deliver it… (if anyone knows, again, I’m interested by the info!)

Taking the crest trail in winter requires a very good training and a great physical endurance, habit of mountains in winter, consciousness of potential risks and a capacity to deal with any difficulty that can be encountered. Are you sure to meet all these needs? If your answer is a no or even a half-yes half-no, drop the idea and take the Valcarlos path! If your answer is a total yes, well, you already know it doesn’t assure you a stage without problems or accidents.

What happens if one is found on the forbidden path? (without the theoretical authorization) First, one gets a nice fine that can go up to 12.000€… The budget of several Camino that just goes down the drain! If one needs to be rescued, one may add the cost of the rescue party, which will be entirely his to pay:

“It immediately calms one down!” (As very well said by the St James’ Association of Pyrénées Atlantiques, source for these rates).

Finally, let’s not forget the mountain in winter time can be fatal. The crest route is not worth losing your life for it: to reach Roncesvalles, prefer the other option! Let’s have a thought here and now for all of the men and women who lost their lives on this stage…

Starting in Saint-Jean-Pied-de-Port at this period, “how-to” 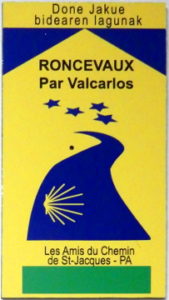 First, another little reminder: the pilgrim’s office is open every day and all year long! Before starting the Camino, stop by and collect intel there is a must. Even if you’re so excited to go! One can find there explanations on the Valcarlos itinerary, the weather forecast  for the stage and all sorts of useful tips. Don’t forget to get the explanation notice for the Saint-Jean-Pied-de-Port/Roncesvalles stage.

Then, walk to Roncesvalles by the Valcarlos trail. After passing the city-center, go up the street “rue d’Espagne” and pass the ancient fortifications. Not much further is where the paths split. The crest route goes straight forward, the Valcarlos route turn on your right! In case you’d be overcome by your enthusiasm, a sign reminds you of the fork… no excuse! The marks to follow are a yellow and blue sign with a green line (left picture). All is left to to is to follow the Way and enjoy it: Buen Camino!

The essential in 3 lines +1

Winter closure of the Spanish stretch of the GR65 and GR12 to Roncesvalles, from November 1st to March 31st

Legal restriction: fine and rescue party cost to be paid by the by-passers

Have you done Saint-Jean-Pied-de-Port/Roncesvalles between November 1st and March 31st? What itinerary did you chose? In what condition and how? 😉