Here is a new piece of my pilgrim art I’d like to share. This time, Saint James’ cross is the star! 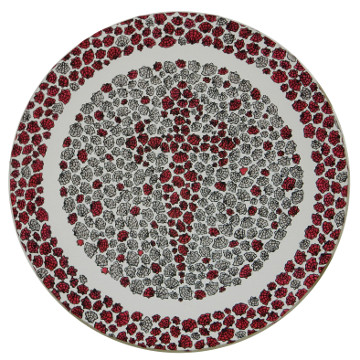 It is the symbol of the knights of the Order of Santiago. This military and religious group was created in the 12th century to defend the Catholic Hispanic lands against Muslim domination. This Order was gradually disbanded and doesn’t exist in the same way anymore. After a slow assimilation into the Crown of Spain, the Order became a way to distinguish its most loyal supporters. Today, it’s an honorary distinction.

The cross itself is red, formed as a sword with an heart on its top and 2 fleur-de-lis on the guard. Altogether, they recall the military and religious function of the Order. It also honors the souvenir of its patron saint, James the Greater.

It’s a small painting, round with a diameter of nearly 12 in. I used red and silver acrylics markers and paint. 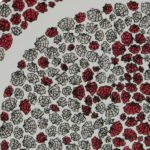 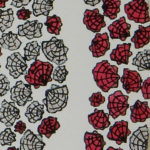