On December, 8th 2015, Pope Francis opened the Jubilee of Mercy. Since this date, Catholic around the World have lived a very special year! This week, the time has finally come to close the event… As in the rest of the world, celebrations are taking place along the Camino. Meetings are organized, Masses are celebrated, Holy Doors are sealed.

Focus on an exceptional event for Catholics… and the Camino de Santiago! 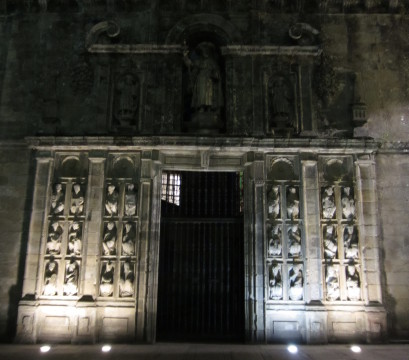 What is a Catholic jubilee?

A jubilee is the celebration of a special anniversary; an even that is litteraly joyful! For Catholics, it’s also the occasion to (re)focus on their faith and practices, to come closer to God and the Church. A jubilee is also a Holy Year. Such year is celebrated every 25 years since 1300 and, until 2000, its effect was limited to Rome (Italy). However, the Pope can exceptionally declare a jubilee: it’s then called an “extraordinary jubilee”. It happened twice in the past century: in 1933 an in 1983.

A jubilee is of great importance for believers! Indeed, they can be granted exceptional plenary indulgences, that is to say, the full cleansing of all their sins for their temporal lives. Of course, there are specific requirements to get it. Traditionally, plenary indulgences are gained in exchange of various spiritual actions (among which confession, communion, charity and good works). The Pope also has the power to give a theme to a jubilee and to set specific practices for it.

Pilgrimages are at the heart of jubilees. Catholics have the obligation to do one to receive the indulgences. The pilgrimage is here understood by its simplest meaning: “going to visit a sacred place”. Until 2000, one consequently had to go to Rome.

What is the Jubilee of Mercy?

This jubilee had 2 main purposes. First, to commemorate the 50 years of the closure of the closing of the Second Vatican Council. Then and mainly, to put the Divine Mercy at the center of the spiritual life of Catholic believers.

The Pope also wished that the experience of Mercy and the indulgences would be achievable by all believers. Conventionally done to Rome, the pilgrimage was made possible everywhere in the world! Catholics around the globe had an easier access to plenary indulgences. Instead of a pilgrimage to Rome, everyone had the opportunity to validate his-her pilgrimage in his-her region, thanks to the opening of Holy Doors in every diocese. These were called “Doors of Mercy” for the occasion.

Santiago and its pilgrimage at the heart of the jubilee

Jubilees can be specific to certain sacred places. This is true for Santiago when Saint James Day (July, 25th) happens to fall on a Sunday. These jubilees are called “Jacobian” or “Compostelian” holy years. On a regular basis, Santiago consequently celebrates a specific jubilee occurring every 6, 5, 6 and 11 years. The last one was in 2010… For these occasions, the Holy Door of Forgiveness of Santiago’s cathedral is opened; plenary indulgences are also granted to its pilgrims (still against the traditional actions).

Santiago is already a great pilgrimage that has its own Holy Years. As part of the Jubilee of Mercy, Santiago’s cathedral opened its Holy Door outside of the Jacobian Years… An unprecedented event in History!

Another singularity for Saint James’ pilgrimage… Because the Jubilee of Mercy affects all dioceses, Doors of Mercy have been opened along all the Caminos de Santiago. During the whole past year, there were no need to go to Santiago to receive plenary indulgences. The pleasure to go alone made pilgrims hit the road!

Closure of the jubilee: Rome, Santiago and along the Camino

The Jubilee of Mercy will end this coming Sunday, on November 20th 2016. Pope Francis will close this Holy Year by a ceremony and the sealing of the Holy Doors in Rome.

A week before this event, most diocese will seal their own Doors. It’s true for those in Spain, and so, for Santiago. The cathedral sealed the Door of Forgiveness last Sunday, on November 13th 2016. It will remain closed until the next Jacobian Holy Year, in 2021! The ceremony in Santiago has particularly been watched and shared among the pilgrims of Saint James’ Way. 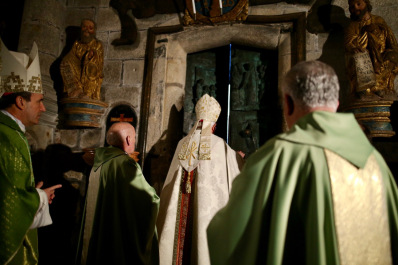 However, sealing ceremonies of Doors of Mercy have been numerous along the Caminos… Even more, if you have missed it, you still have a chance! Some are still not sealed; ceremonies and events will take place this week-end to celebrate the end of the jubilee. If you’re a Catholic, a pilgrim of Santiago or just a spiritual curious person, don’t hesitate and go celebrate it on the Camino! Get more info from your diocese or from the one you’re in now!

Here’s a list of cities that have opened a Door of Mercy during this Holy Year, on the Ways in Spain and France:

And you? Have you walked through a Door of Mercy this year? Did you know you did? Have you done a pilgrimage because of the Jubilee of Mercy? 😉